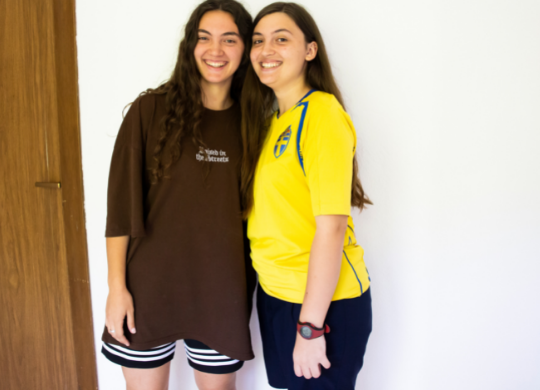 Humanitarian aid worker Francesca Brufani and photographer Francesca Boccabella were on a mission in Kosovo and met with Dardana and Ariana. The sisters have received university scholarships supported by the Valter Baldaccini Foundation. Here’s the story of a day spent together as told through their pen and photos.

It’s the night before her exams and a lanky Ariana, 5’7” tall, has painted her nails with daisies after an evening stroll through Leskoc’s wheatfields, before devoting herself to a final review. Tomorrow it's her turn for the volleyball practice test - volejboll, as they say here - in two days for the English exam.

Ariana smiles, in her ponytail that makes her look like the elite Olympic athletes you can only watch closely on TV.

Ariana speaks Italian "like water" as they say in Kosovo when mastering a language. She is twenty years old and is enrolled in the Faculty of Physical Education in Pristina, in one of the most prestigious universities in the country. She is a guest in a boarding school together with sister Dardana, also in the first year of university. Twenty years ago, before the war, owning books in their mother tongue was illegal, they studied in cellars and garages, while the Albanian presence in universities was contingent on the Serbian one. Today, however, there is an air of normality.

Dardana, is tall and amber-haired like her sister and her name echoes that of an ancient Illyrian tribe. She loves working with children more than her sport. She studied History for a year, but now she is preparing to take the entrance test for Educational Sciences and give back professionally in the Leskoc House.

Ariana and her sister lead us by the hand into their bedroom of mirrors, photos, letter stubs and memories hanging on a thread. There are still packages to unpack from the boarding school where they sleep in Pristina, near the university. They returned there for the summer break to take advantage of the cooler hills. “Life in Pristina is different and the lessons and the study take a lot out of us…”

Dardana has filled clothespins with her drawings, Ariana with pictures that she sketches in her spare time, sometimes out of boredom, sometimes for acquaintances. From their windows you can see the most beautiful sunset in Kosovo on Bjeshkët and Namuna, the Cursed Mountains. This place is populated by myths about zana and maleve, fairy women with very long hair who would bring lost people back to the right path.

"The university can open doors that a young person still cannot fully understand" explains Violeta, one of the Leskoc House operators. With her gaze and her wisdom she seems to be their fairy of the woods that points the way, just like on Bjeshkët and Namuna. "The problem here is that prices are similar to those in Italy but salaries are much lower. To dream of a future to stay remains a challenge when the economy is almost exclusively based on remittances from abroad. But training today can allow the young people of Kosovo to make the leap...". And Ariana, understands jumps and studies them in sport and has even beaten the KFOR soldiers in a charity tournament with the other boys of the House. The way is opening up for her and her sister to be able to jump into live as well”.

Ariana and Dardana bid us farewell and as we are about to leave their room, Ariana, without realizing it, points to the green and yellow picture hanging on the desk, which is the background to the summer days of study. Above it is written "Hope never disappoints". It is about hope after all, comments Violeta, "Kosovo is a woman: in Albanian it is Kosova, it’s female". The country’s hope, it seems to say, passes from here to these young women: from Ariana, from Dardana, from their leap and from their studies.

The socio-educational project in Kosovo is only possible thanks to the support of our donors. Only thanks to your help will Dardana and Ariana be able to continue their studies and thus have the concrete possibility of a better future. Donate now.

Research updates and an interview with Dr. Scordamaglia

Earlier this year, we told you about Dr. Francesca Scordamaglia's research project when her study, w...

A director for "From the roots"

We are very happy to announce that, starting with this issue, our periodical “From the roots” has a...

The story of Lulù: "So my life has flourished"

Her nickname is Lulu, the nickname her mother used to call her as a child. Since then, this has beco...