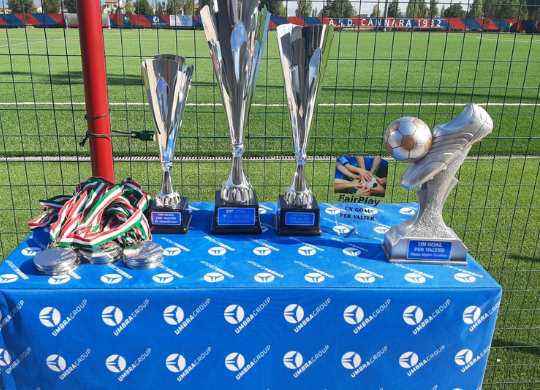 The first edition of A goal for Valter was held from September 10th- 12th, 2021, a sporting event highly anticipated by ASD Cannara and organized in collaboration with the Valter Baldaccini Foundation and UMBRAGROUP, with the patronage of the Municipality of Cannara.

Six teenaged teams (under 15) challenged each other over the weekend on the field of Località Casone and in the Spoletini Stadium in Cannara. The event focused on the young people and tried to convey what for Valter Baldaccini was the fundamental value of sport: having fun while respecting the their teammates, opponents, the referee, and on those sitting in the stands to cheer.

During the three beautiful days there was no lack of entertainment, such as the dances organized by the Scarpette Rosa dance school in Cannara, and reflection, such as the banner brought to the field by the boys to commemorate the twentieth anniversary of 9/11 in memory of the Twin Towers and the beautiful testimony of the young people from “Casa mia, casa nostra” and the project that the Valter Baldaccini Foundation is supporting in Tor Bella Monaca.

And congratulations to Ternana who won the trophy in the first edition of “A goal for Valter”!