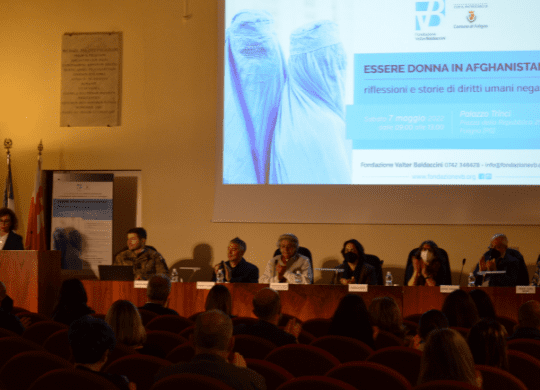 What is the situation of women living in Afghanistan? What is the life of those who have been forced to flee after the sudden political changes of last summer? What was the important work carried out by the Italian Army in interventions supporting the Afghan people?

We tried to answer these and many other questions during the conference “Being a woman in Afghanistan. Reflections and stories of denied human rights".The Valter Baldaccini Foundation organized this event on Saturday 7 May 2022 in Palazzo Trinci in Foligno to celebrate its seventh birthday and, most importantly, to give voice to women and the Afghan people, whose situation dramatically worsened after the return to power of the Taliban in August 2021.

The interesting morning presentations, moderated by Dr. Maria Clara Mussa, journalist and founder of Cybernaua.it InformAction Magazine, raised awareness and deepened our understanding of the complex historical and social framework of Afghanistan through different points of view. This helped tell the story surrounding Afghanistan’s complex situation which is as welcoming as it is difficult and dangerous.

S.A.R. Princess Soraya of Afghanistan, born and raised in Italy, spoke of her daily commitment as an activist for the protection Afghan rights, a battle that is also fought by Dr. Frozan Nawabi, who was Director General for rights of the Afghan Ministry of Foreign Affairs until she was forced to flee.

The photojournalist Daniel Papagni, through his photography, documented the beauty and extraordinary nature of this people, and also highlighted the risks taken by those who work in war zones.

Via a connection from Islamabad, Dr. Arif Oryakhail, head of the Italian Development Cooperation Agency’s (Aics) health programs, gave us live the news that The Taliban had just imposed the obligation for all women to wear the burqa. He also described the country’s health situation where today we are facing a devastating humanitarian crisis.

Col. Mauro Bruschi, an active duty officer who has served on various missions in Afghanistan, described the work and the various projects promoted in the territory by the Italian Army. The Hon. Marina Sereni, Deputy Minister of Foreign Affairs and International Cooperation spoke about the current efforts that our institutions are making to help as many people as possible.

Thanks to all the speakers for this truly enriching morning.

The first and second part of the recording of the Conference are available on our Youtube page.