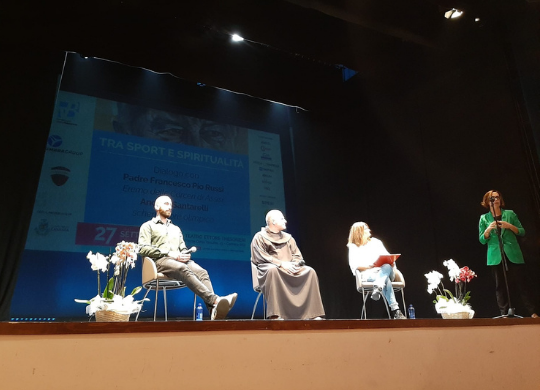 Friendship. Perhaps this is the word that echoed loudly during the meeting "Between sport and spirituality" which was held in Cannara’s Ettore Thesorieri Theater on Monday evening, 27 September 2021.

During the presentation, moderated by Paola Pompei, Father Francesco Pio Russi of Assisi’s Carceri Hermitage and the Olympic fencing champion, Andrea Santarelli, they discussed the idea of ​​friendship that puts the other at the center, welcomes him, respects him, supports him and applauds him even when he is your opponent. Friendship is love and sport is a way to communicate one's passion and ability to love. This notion struck Andrea like a lightning bolt when he was 6 years old which inspired him, with great commitment and sacrifice, to compete twice in the Olympics.

This gathering is one of the events organized in September by ASD Cannara, the Valter Baldaccini Foundation and UMBRAGROUP, with the aim of enlightening young people and reminding adults about the values ​​that made Valter Baldaccini an extraordinary man.