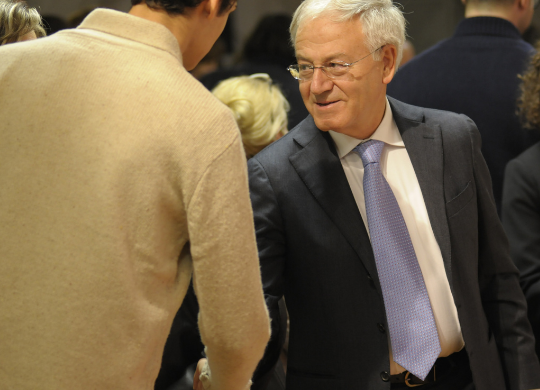 Among the thoughts of Valter Baldaccini: the individual at the center

We cannot recognize the value of everyone's work and think that wealth should be distributed in the community if we do not assume that the individual is at the center of everything.

For Valter Baldaccini, the most important capital that the company has are the people.:Valter was committed to ensuring that the work environment was as humane as possible, working for a company on a human scale in which the economy was at the service of the people.

"Man can never be considered one of the links in the production chain. Man - the individual is at the center of work, he cannot and must never be understood as a means of production, but through work man is completed as a person and cannot be brutalized by anyone. Man must always be respected" (Valter Baldaccini, address for the commemorative Mass in the company of John Paul II, May 2, 2005).

In his actions, Valter demonstrated that a company can combine business and ethics, profit and maximum respect for everyone, and also be a world leader in the production sectors where it operates and carry out solidarity actions. Constant attention to the development of each employee, to his well-being and that of his family, the commitment to building relationships and sharing values are fundamental aspects for achieving the company's results.

“You cannot imagine what joy mixed with a sense of responsibility I felt in understanding what results can be achieved in a company where the individual is at the center of its business. These values will never appear in a balance sheet, but believe me: they are the basis on which a company that wants to have a future rests" (Article by Valter Baldaccini in the Noi Umbra period by Umbra Cuscinetti, December 2006).

A solid future, which can only be built if you are an example:

"I am strongly convinced that the greatest strength an entrepreneur has is not his real estate assets or his bank account, but it is his personal vision that he transmits to others with the example of his life. A life that must be anchored to principles that are constant references in the various situations that the company dynamics will present over time" (Valter Baldaccini, speech for meeting with suppliers, November 19, 2010)

Among the thoughts of Valter Baldaccini is the column we have been publishing for several months to discover and highlight the principles and actions of Valter, through the words we found among his writings.

We are publishing this new edition on a special day: in fact, today is his birthday which we want to remember again.