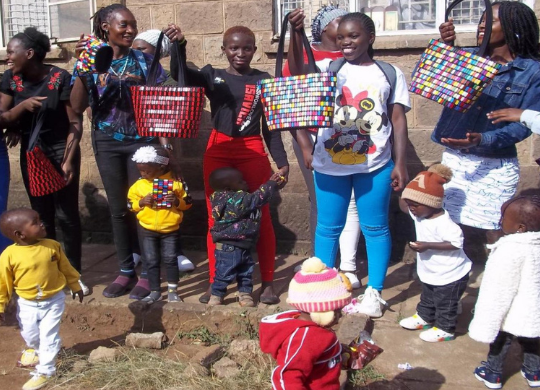 A year has passed since the beginning of "A job for the ymothers of Mathare", the socio-educational project started in Kenya, in Mathare, one Nairobi’s immense slums. The plan is to accompany fifteen very young mothers on a training path with the aim of teaching them how to make small handicrafts and learn an activity that can generate income.

In addition, their support also includes modest financial aid for shopping and medicines and a series of psychological support meetings.

Mathare's mothers are Veronica, Nancy and Everlyne, girls little more than teenagers, who became pregnant during the pandemic, victims of abuse because they were forced into prostitution.

The path hasn't always been easy. Especially at the beginning, the mothers were unmotivated and hopeless. Little by little, they began to have faith in the project and to understand the importance of learning a job, to become autonomous and independent. Of the fifteen women involved, only one of them was unable to reach the end of the process because she fell victim to trafficking.

During the psychological support sessions, some of them opened up and said they did not feel safe and were subjected to aggression and mistreatment. The big problem is that today there is no shelter where young women can find a safe haven.

Today these young women who at first made only earrings and small beaded bracelets have become very good craftswomen. They acquired new skills that led them to the creation of beautiful kiondo, typical Kenyan hand-made bags.

Among teenage mothers today there are those who are ready to start a small business producing and selling earrings, bags, key rings. There are those who have decided to go back to school and complete their education and others who have started attending a training course for beauticians and hairdresser. These twelve months together have helped give these girls the real possibility of a better future.

There is a saying in Kenya: "Educating a woman means empowering the whole community". And so it was: the girls passed on the knowledge and skills learned in the course to friends and neighbors who in turn have been inspired to start a small business for the production of handicraft products.

According to the report of the African Institute for Development Policy (AFIDEP), Nairobi County is the area that is recording the highest number of teenage pregnancies (11,795 in the period January-May 2020 alone).

In this last year there have been many young women who have asked for help from our contact person Joab Omoto and the sisters of Mathare who in recent weeks have begun identifying fifteen new mothers who will begin their path towards formation, trust and autonomy.

A path that will only be possible if you are close to us. DONATE NOW.

Between solidarity and fantasy

Solidarity has no borders. And this time it is appropriate to say this because support for the Valte...