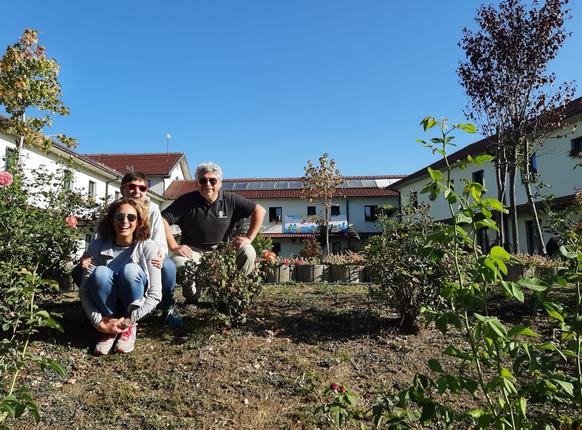 The Foundation volunteers in Kosovo

For a week the volunteers Victor, Michele, Francesca and Giuseppe, accompanied by Paola, were in Kosovo, to get to know the of the cattle shed construction project and serve as volunteers in the Leskoc House.

The history of Kosovo

Kosovo has a complex history, full of contradictions and injustices and perhaps, looking from the outside, as people comfortably living in a stable country, it’s easy for us to judge and reach hasty conclusions.

Destroyed by the war twenty years ago, Kosovo has been rebuilt, but it is still not recognized as an independent state by the eighty-member states of the UN and five by five of the European Union. There is a permanent ethnic conflict with Serbia in the territory, which can still be clearly seen today. In Mitrovica, north of the country, the river that runs through the city is like a wall. On the one hand, the Orthodox Serbs read and write in Cyrillic and purchase strictly Serbian products with dinars in the shops. On the other hand, the Kosovar Albanians, Muslims, communicate in Kosovar and they use the euro. To connect, or rather to divide the two parts of the city, there is a bridge, manned day and night by the KFOR mission soldiers, under NATO command which also includes the Italian army.

In this context, where feelings of hatred and nationalism are heavy, a new generation is growing up. Welfare allows practically everything to be built and there is a lot of unemployment. Despite compulsory schooling, not all children attend. Arranged marriages are the norm. Women are far from emancipation and crimes of honor are still considered legitimate. Those who can afford to leave often go to Germany and Switzerland. They then send the money back to their native country and build Hollywood-style villas inhabited only a few days during the summer. The glittering plaster seems to shout: "Look at me, I’ve made it! "

And who's left? There are those who are too poor and have no choice, but also those who are strongly tied to their land and, despite the difficulties, they want to stay to try to make a concrete contribution to a country that deserves the best.

Massimo and Cristina’s Home for Children

For twenty years, Massimo and Cristina, guided by a profound faith, have made themselves available to those most in need in Leskoc House. They entered the first refugee camps as soon as the war ended, when Kosovo was just a pile of rubble. With humility and respect for ethnic and religious diversity, they have been helping this country ever since. Massimo and Cristina have decided to remain in Kosovo and create a refuge dedicated to welcoming minors, which in 2014 became a real shelter. All the Kosovar children deserve the possibility of a different life. All the children hosted in the splendid House of Leskoc, in the hills, have become Massimo and Cristina’s family.

Job opportunities for the guests of the Leskoc House

The children housed and raised in Leskoc House have become adults, and therefore the need has arisen to create job opportunities. The Cooperative was established for this purpose. It is led by the very nice and capable Besart, who manages:

The Valter Baldaccini Foundation is helping develop the cooperative and support the work in Kosovo and is committed to the project “A Cattle Shed for Leskoc”.

The experience of the Foundation's volunteers

The Foundation’s volunteers set out to learn about and experience living in Leskoc House and experienced an intense week full of emotions and each, in his own way, had his own story to tell.

Continue to follow our news. In the coming days we will publish the thoughts of the volunteers on Kosovo and on the experiences they had.
Falemiderit (thanks) to Leskoc House for this wonderful experience. See you soon!

A BARN FOR LESKOC HOUSE