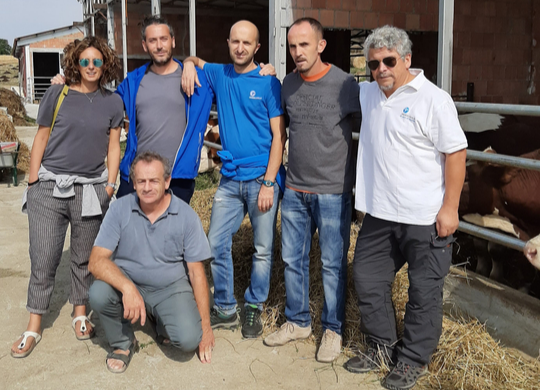 On Leskoc's farm with Giuseppe

It was Massimo’s idea to build a farm. He arrived in Kosovo twenty years ago along with Italian soldiers during the war, with the aim of giving young people a future by welcoming them into Leskoc house. Massimo took us to visit it on the afternoon of the first day with Besart. Massimo has known him from the beginning when, still very young, he was buzzing around, intrigued by the foreigner from Italy. The complex is located a short distance from the house, downstream from the agricultural land. There are about 100 hectares of which 20 are owned, and can be reached by following a steep descent.

The first structure you encounter is the barn where dairy cows and adult calves are raised. We are a bit hesitant about disturbing the children who are taking care of the animals, those who remove the manure, those who add hay to the rows, those who direct the animals for the first milking. Instead they are very friendly and almost laugh at our inexperience. The most enterprising of us (Michele) asks if it is possible to try to milk one. One of the guys who is working smiles at him and hands him the stool after showing him how to do it. Imagine his face, like that of a happy child, when he sees the first drops coming out: "... you feel how hot it is ...".

However, it is better to leave it to those who know how to do it better. So the young man, by operating the automatic pump, starts milking the first two animals. Massimo explains that milking takes place twice a day on about 10 animals. The milk is then stored immediately in the fridge and transformed into dairy products that the house produces in its laboratories ... the cheeses and mozzarella we ate during our stay are worthy of the most famous Italian products. There is also a second stable, that’s currently populated by smaller calves. "Let's take a picture with the little bucks,” says Paola. He immediately goes up to caress one of them who is scared away ... but he doesn't care much ... after a moment he slides back into his beloved hay while Paola poses for a very "special" selfie.

Behind us, the group of boys who are finishing the roof of the third barn which will be used as a preliminary deposit for hay and cereals. Massimo explains that again last year, they had to sell the wheat at a lower price, with a considerable economic loss because it got wet during the harvest. Thanks to the new barn, the company will be able to store cereals and distribute hay without having the problem of rain and mud, which, especially in winter, are the order of the day. Still further down, there are two other structures, one where the grain is ground to produce the feed for the animals and another where the vehicle maintenance takes place. The latter are very important because it is difficult to find spare parts in Kosovo ... as a good mechanical engineer, even a mechanical engineer, I enter without fear because I’m in the company of objects familiar to me... keys, welders, drills, grease and oil that are always in a workshop.

Finally, the pig barn ... small and large in size ... the little ones are really affectionate, so much so that Francesca, feeling pity for those curious little pigs, solemnly promises "... I won't eat you anymore!" There’s a pang of guilt for those delicious slices of salami eaten the night before. Victor watches us from behind ... he is the wisest of the group. He mumbles something to me with his strong Argentinian accent that I don’t understand well... perhaps he talks about the containers placed nearby where two house boys with more serious mental handicaps lodge, because social workers forbid them to live with the other boys. Massimo, however, has begun, further upstream the construction of the new structure that will house them in the future, "... I want to give them dignity” he says resentfully.

But then I see Victor who continues to stare insistently at those beautiful fattened calves ... perhaps as an expert stoker chef he will be thinking "Cetto ... with all these beautiful victims ... the Argentine Asado (barbeque)  would be just fine!".

You can also support the project A barn for Leskoc House.
Thanks to your support, the House’s young people will have the opportunity for a real job and liberation. Donate now!

A BARN FOR LESKOC HOUSE