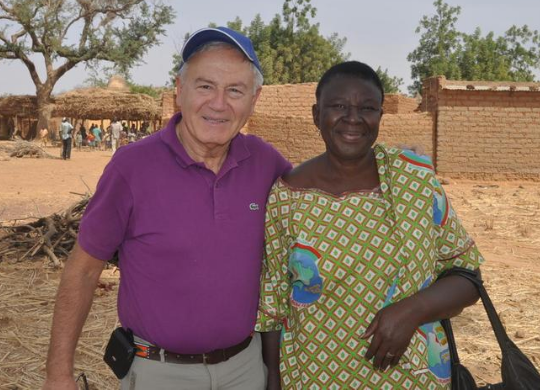 "Among the thoughts of Valter Baldaccini" we’ve discovered words of hope and an invitation to always be united and to act for solidarity. In this new appointment with the column we want to highlight a word found often in his writings: peace.

Valter wished everyone the gift of peace at the end of each Christmas speech. It is the highest value to pursue. For Valter, each person has a specific responsibility: to create a more just world and be a builder of lasting and radical peace which is possible only if all men live with dignity and equality.

“The world is the whole globe and therefore we must also think of those who need us most. For this reason, initiatives, whether in Argentina or Africa, also make sense, because the good that we want to give to future generations, the highest good is peace. We can only create peace if we fight poverty and ignorance. And this serves everyone’s interest" (Interview with Valter Baldaccini, June 2012).

Peace for Valter had two great enemies: poverty and ignorance. He was convinced that man can only defeat them through concrete self-actions. He committed himself to self-actions throughout his life and today they are live through the socio-educational and humanitarian projects of the Valter Baldaccini Foundation.

Building peace means helping those who are most in difficulty beyond our borders, but it is also a daily commitment that Valter has also tried to achieve in the life of the company, convinced that peace is that fertile ground on which development and the future can be generated.

"I have always prayed for justice and peace within our company. Justice and peace. Not man-made justice but what God wants, where everyone has respect and where we don’t simply think of ourselves" (Valter Baldaccini, speech during the Easter blessing of April 9, 2014).

"May a new age begin in which humanity finally discovers peace as a value on which others are grafted, because peace means life, growth, the search for improvement in relations with others and in relations between people. In peace, man can truly become the center of all activities" (Valter's article in the UMBRAGROUP magazine, Noi umbra, December 1999)

Only together can we build a world of peace: give now.

Updates from the Kosovo project

The socio-educational project started a few months ago in Kosovo has a clear objective: to improve,...

The Foundation supports research studying the effects of the...

What are the effects and problems that we have already encountered and what will be the future conse...

There are many people who walk alongside us every day. They are people who have known Valter Baldacc...

The story of Giulio, a child followed by the educators in To...

Giulio is 3 years old and lives in Tor Bella Monaca, one of the most difficult neighborhoods in Rome...

Give Sheryl a job for Christmas

A pregnancy marked by abandonment and situation filled with economic difficulties. This is the story...

The new issue of the periodical “From the roots” is online

The new issue of "From th Roots", the Valter Baldaccini Foundation periodical is online and is ready...

Help provide a better future to Carola and little Adam

Carola got pregnant shortly after turning 18. When she found out, she was frightened and disoriented...

The Foundation wins the Eubiosia 2021 award

We are very proud to inform you that the Valter Baldaccini Foundation has been awarded the Eubiosia...

Help Veronica and her family by voting on our project

“My name is Veronica, I am 20 years old and I am the mother of two children: the eldest is two years...