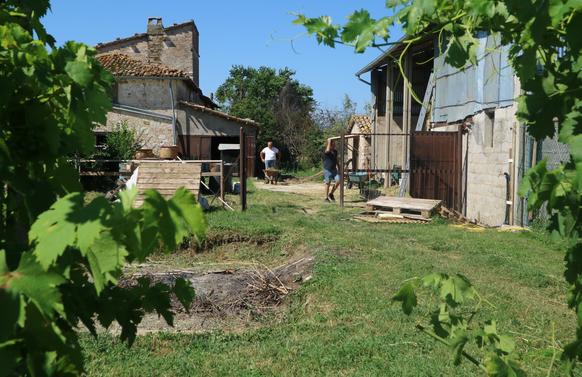 A new life for Antonio

It has been a life like the plot of a film, halfway between a comedy and a thriller, a life of departures and returns, of voyages to new shores - not always sun-kissed, and of rebirth. It is the one Antonio has lived throughout his 60 years and, thanks to the Family and Work Project which is strongly supported by the Diocesan Caritas of Foligno and the Valter Baldaccini Foundation, he has found stability.

A stability comprised of mornings spent at the farm and afternoons spent with the youngest of his four children. “Here, I’m fine – he says- I feel I have reached a beautiful point in my life. Of course – he confesses – there are difficult moments because problems never go away. But today, there is a bit of air.” He says this while looking ahead, staring at an indefinite point, perhaps the trees in front of him, perhaps the future he sees on the horizon. A future that is probably different form the one he thought life had given him, but that isn’t so bad.

Especially looking back and revisiting all the experiences, sometimes adventurous, that have left their mark. “I was born in Naples – he explains, going back to the past ‘but at the age of four, I moved with my family to Umbria”. It was the sixties, and even though he was a child, Antonio will never forget the difficulties his parents encountered once they arrived in Foligno. ““They were terrible years, - he continues – when there was a lot of distrust of the Southerners. The only ones who were hospitable to us were the owners of the Hotel Italia. They rented us a room and a kitchen. It was me, my mother, my father, and my sister. Four other brothers had remained in Naples.”

Thus began his life “in the North”. His family was large but only his father worked. “And I remember that I – even as a child – contributed, giving a hand. I was only 6 years old and I was collecting iron and cardboard.”  Little interested in studies, at the age of 7 he was sent to a boarding school in Belfiore for three years. When he returned home, he resumed his studies; however his strong temperament got the better of him.

“After the first year of middle school I was suspended, and at that point I decided to leave school permanently.” He would resume his studies at the age of 16, attending night school with the goal of getting into the third year of secondary school. But at that time, he had some problems with the law. Still a minor, he was sent to Fabriano to do some socially useful work. It was an alternative “punishment” to juvenile prison. There he began to work for some companies, but when his girlfriend, who later became his wife and the mother of two of his four children, visited him, he decided to give up everything to follow love.

And then his first daughter was born. Then the other three arrived. He had the last two with different companions. In between, he had a job as a linen representative that took him around Italy, but above all, it was the first great journey of his adulthood. It was in the early nineties, and he decided to follow his new partner to Russia. “I lived there for four and a half years – he recounts – and I met all kinds of people, spent time in disreputable places, and was always living on the edge. Then I returned to Italy to be with my children. But after a short time, I ended up in jail for the possession of a pocket knife. I kept it in my fishing box, one of my passions.”

However, this explanation was not enough to avoid arrest. “Released from prison – he continues – I started working again. Some friends had enlisted me in running a night club, but it did not end well, so I found myself serving another small prison sentence.”  Next came the other great journey: Mexico. “I was there for a year and a half. Then I came back to Italy to be close to my father. He wanted me to return, so I did. He was ill and I took care of him, and then he left us. I had decided to return to Mexico, but in the end, I stayed here for my children.”

In his 18 months overseas, his life, however, had not been a bed of roses. Once again he found himself in situations on the fringe of normalcy, even at the risk of his own life. In short, experiences have left their mark on him but they taught him, in hindsight, that there is something else.

The return to Italy, the economic difficulties, the problems in making ends meet, and the inability to think about the bills, pushed him toward Caritas. “The day I met Patrizia (Deputy director of the Diocesan Caritas of Foligno) I was facing great economic difficulties. I had nothing.” And now that I can count on this work grant, it seems like I have a lot. I’ve learned to understand the value of money and I no longer have the yearnings I had in the past.  My life has changed. Now I savor things that I didn’t care about before. Some friends have suggested going to the United States, but I told them, now that I’m on the farm, I want to stay here. Every now and then I bring my youngest daughter. I’m fine now.

We would like to thank the press office of the diocesan Caritas of Foligno for collecting and writing Antonio’s story.

Mathare is one of the largest slums in Nairobi. Three square kilometers, not far from the center of...

Research updates and an interview with Dr. Scordamaglia

Earlier this year, we told you about Dr. Francesca Scordamaglia's research project when her study, w...

A director for "From the roots"

We are very happy to announce that, starting with this issue, our periodical “From the roots” has a...

The story of Lulù: "So my life has flourished"

Her nickname is Lulu, the nickname her mother used to call her as a child. Since then, this has beco...